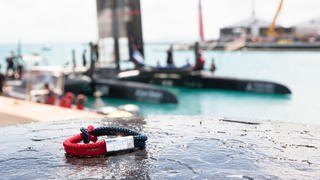 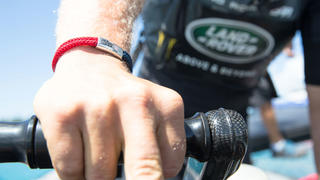 With just days to go before the start of the 35th America’s Cup in Bermuda, Land Rover BAR have launched a limited edition supporter’s wristband made entirely from recycled ocean plastic waste.

A key part of any America’s Cup style guide, the nautical-inspired “Band of Britain” is made from recycled plastic that has been recovered from oceans and coasts around the world. The knotted red and blue design has been created with the team’s sustainability partner 11th Hour Racing and a pioneering company in recyclable material, BIONIC yarn. The sleek alloy clasp has also been produced from 100 per cent recycled materials.

The wristband not only shows support for the British team but also raises awareness about a global issue. There are around 8 million tonnes of plastic pollution flowing into the sea every year making it one of the biggest threats facing our oceans. The problem is so extreme that it is estimated that by 2050 there will be more plastic in sea than fish.

Sustainability in the sailing world has been a key concern for Land Rover BAR and the team have long been advocates of clean oceans and combating climate change. Ben Ainslie, team principle skipper for Land Rover BAR, said, “This is one of the most difficult sporting challenges. We want to make Britain proud, while raising awareness on the global issue of ocean plastic.”

The “Band of Britain” is available to buy online, and will also be available to purchase through the official America’s Cup merchandise outlets in Bermuda. All profits from the sale of the wristband will go to the team’s official charity, the 1851 Trust.

How to watch the America's Cup Superyacht Regatta