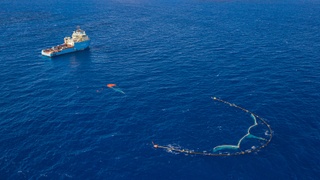 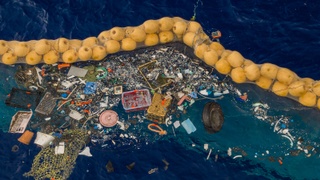 Technology developed by The Ocean Cleanup has successfully siphoned plastic waste from the ocean for the first time.

The huge floating device known as System 001/B captured and retained plastic waste after being deployed in an area of the ocean known as the Great Pacific Garbage Patch.

The U-shaped boom is designed to catch everything from discarded fishing nets to microplastics. News that the technology works comes after a year of testing the product and more than seven years since The Ocean Cleanup was founded by then-teenager Boyan Slat.

Speaking about the news, Slat said: “After beginning this journey seven years ago, this first year of testing in the unforgivable environment of the high seas strongly indicates that our vision is attainable and that the beginning of our mission to rid the ocean of plastic garbage, which has accumulated for decades, is within our sights."

The Ocean Cleanup is using the newly developed system to specifically target the Great Pacific Garbage Patch. Located in the waters between Hawaii and California, this floating island of rubbish is estimated to cover 1.6 million square kilometres in size, weighing approximately 80,000 tonnes and containing around 1.8 trillion plastic pieces. The plastic is critically endangering marine creatures, which are becoming entangled in debris and mistaking plastic for food. The NGO plans to return the captured waste to shore for recycling.

The Ocean Cleanup now plans to introduce a fleet of these new systems and hopes to halve the size of the Great Pacific Garbage Patch over the next five years.

As the organisation prepares for full-scale development of its product, further expeditions will be undertaken to gather more information on the Great Pacific Garbage Patch.

The NGO is also to begin designing its next ocean cleanup system, System 002. This second-generation product will be able to endure and retain the collected plastic for longer periods of time.

Leonardo DiCaprio to be honoured for environmental work during MYS 2017

Cool conservationists: The eco pioneers making a difference in 2018