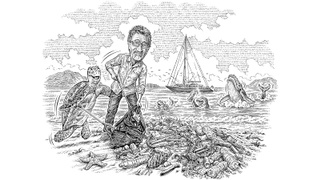 Eddie Jordan: "It's time we all cleaned up our act"

Plastic bottles, carrier bags, cigarette butts… Eddie Jordan has seen them all in the world’s oceans. For our children’s sake, it’s time we all cleaned up our act

The first thing that happens when you step on board Blush is you are given a reusable bottle with your name on it. It’s a little souvenir that you can take home, but it also serves a very important purpose: that is your bottle to use throughout your stay on board, so you never have to use a single-use plastic bottle.

We don’t actually carry any plastic bottles on board. When you’ve got superyachts with some of the most sophisticated water-making technology in the world, why on earth do you need bottled water? It’s a behavioural change we all have to get used to.

We’ve become so used to grabbing a bottle out of the fridge, draining it and then dumping it. When you consider what that bottle has had to go through in its manufacture and the miles it has travelled to get to you, all for a few seconds of refreshment, it’s crazy.

I’ve cruised in some of the most pristine environments on the planet, but you’ll always see a plastic bottle floating out there, or washed up on a beach. It’s a scandal.

I like to think yachtsmen and women are more receptive to these ideas. As an example, there is a great competition in Monaco each year called the Solar & Energy Boat Challenge. Teams from all over Europe compete to build the best entirely solar-powered boat. I try to watch it every year and it’s fascinating to witness the effort people are putting into creating these boats.

Perhaps we’re a bit more engaged because we see first-hand the damage that is being done to the oceans. When you can visit a place like the Galápagos and see nature as it should be, and then compare that with some other places where countries are just tipping garbage into the sea, you get a clear sense of the scale of the issue.

Cigarette butts drive me crazy, too. We operate a zero-tolerance policy on Blush. First of all, there’s no smoking, full stop. But if I ever saw someone flicking a butt into the sea, they’d be straight off the boat.

I just read a story about a whale that washed up on a beach with 40 kilograms of plastic bags in its stomach. It’s hard not to be affected by that. We’re also on the verge of losing a multitude of critically endangered species, from rhinos being poached for the ivory market to African penguins slaughtered for the food industry. For heaven’s sake, how much further down this road do we have to go before we’re kicked into action?

The superyacht industry is making strides in building greener boats, which is pleasing to see. My Formula One race team was the first to build a car from carbon fibre so I’ve been banging on about this for years, but shipyards need to start working more with these lighter materials. Down in the engine room, too, there are lots more boats coming out that are diesel-electric, with massive battery banks allowing you to sit at anchor on your big yacht in total silence.

I know people might say “well, it’s a bit rough being lectured by rich yacht owners on plastics, nature and emissions”, and I understand that, but there is nobody this problem doesn’t affect. It doesn’t cost anything to be a bit more aware of what we’re using and throwing away – and we all have an obligation to make sure the planet we leave to our children is in a decent state. If we can’t do that, then we’ve really screwed it up.

Right, that’s enough of me being serious. Normal service will resume next month with some more crazy stories.

Eddie Jordan’s fee for this column has been donated to charity. Illustration by David Hopkins

On Board with Peter de Savary, Owner of 30m Savvy