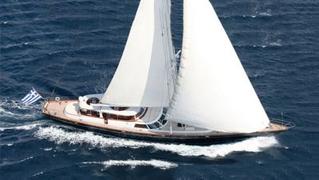 Charter the yacht used in Hitch

On a visit to New York, the 35.97m_ GITANA_ was seen by Hitch director Andy Tennant, who was so taken by the luxury yacht that he re-wrote a scene in the film to include her.

GITANA was built by Perini Navi in 1989, with a refit in 2007 that included new safety systems and updated mod cons. Featuring interior styling by Guido De Groot and ABS compliant, the style throughout is understated elegance, with a neutral palette and leather furnishings, polished wood paneling, plush carpeting and soft, textured upholsteries. There is a formal dining saloon and a main saloon featuring a home theatre system. The all-weather cockpit features full wet bar and grill.

GITANA accommodates up to nine guests across three staterooms (master, double and triple cabin(s) with additional pullmans for two extra guests). Each of the staterooms has its own en suite bathroom with shower, individually controlled air conditioning and LCD TV, DVD player and stereo system; the VIP cabin also features an X-Box.

There is plenty to keep guests entertained on GITANAs spacious decks as well, including a 4.6m Inboard Castoldi jet tender with a set of water skis and towable toys such as a banana and a tube, plus scuba gear, snorkeling equipment and fishing equipment.

Powered by MTU engines, she has a cruising speed of 10 knots and top speed of 12 knots.

GITANA is available for charter in the Eastern Mediterranean.