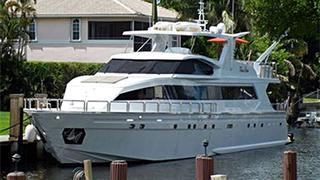 Originally built by Azimut in 1987 as a 26m yacht, she was brought to Fort Lauderdale in 2004 for an extensive $3.4 million refit which included a lengthening of her hull. Sleeping 10 guests in five staterooms, Texas Star has had several successful charter seasons in the Caribbean and is asking $1.69 million.