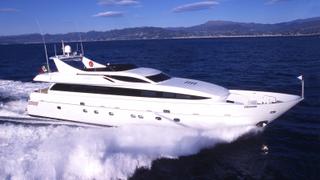 Admiral motor yacht PAB back on the market

Built in aluminium by Cantieri Navali Lavagna, PAB was delivered in 2003 as an Admiral model with a major refit in 2017 and has seen very little use since. A comfortable, relaxing interior by Ivana Porfiri accommodates eight guests in four cabins comprising a master suite on the main deck with a VIP suite and two twin cabins below deck. All guest cabins have entertainment centres and en suite bathroom facilities while a further three cabins sleep five crewmembers aboard this yacht for sale.

The large saloon has settees to port and starboard with a built in bar aft and an entertainment centre including a Samsung television screen. Forward is a formal dining area and further forward still is a fully equipped galley with a breakfast nook for casual snacks.

Outdoors, the aft deck is sheltered by the flybridge overhang and offers al fresco entertaining and dining at a set of bistro chairs and a table while the flybridge is massive – ideal for large parties with extensive seating to port and starboard, a bar and electric grill. Twin 2,285hp MTU diesel engines power her to a top speed of 30 knots and a range of 1,000 nautical miles at her cruising speed of 28 knots.