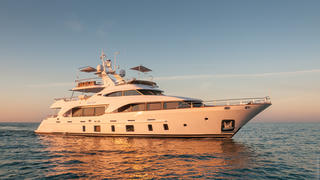 The 33.02 metre motor yacht Orso 3, listed for sale by Fernando Nicholson at Camper & Nicholsons, had been sold in an in-house deal.

Built in GRP by Italian yard Benetti to a design by Stefano Righini, Orso 3 was delivered in 2013. A modern interior in neutral shades by Francois Zuretti accommodates 12 guests in five cabins consisting of a full beam master suite on the main deck, two VIP suites and two doubles plus two Pullman berths, and all cabins have entertainment centres, Samsung television screens and en suite bathroom facilities. In addition, there are quarters for six crew.

Orso 3 is a highly customised Benetti Tradition 105/108 model: she was built on the new 108 Tradition Supreme hull but has the deck layout of the 105 Tradition. While under construction the garage door was customised by Benetti to create a large beach club when in the down position. She also boasts a custom bar, Jacuzzi spa and oversized dining table on the sun deck.

Other features include 22 colour Ocean LED underwater lights, which can be controlled by an iPhone, and an integrated audio-visual system is on board with smart television screens in each cabin and the main saloon. Twin 1,000hp Caterpillar diesel engines give her a cruising speed of 13 knots and she is fitted with Naiad zero speed stabilisers.