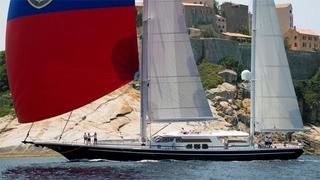 A pedigree superyacht, she was built by Holland’s Jongert yard in 2001 to a Tony Castro design. Most recently refitted in 2009, she is Lloyds classed and sleeps up to nine guests in a master, double and two twin cabins plus three Pullman berths.

Passe Partout comes with an array of extras for active watersports enthusiasts, including a dive compressor and has a folding keel. At her cruising speed of 10 knots, she has a range of 4,200 miles powered by a 1071hp MTU engine.

On display at the Palma Superyacht Show from May 1st to 5th, Passe Partout is now asking €8.25 million, VAT paid.