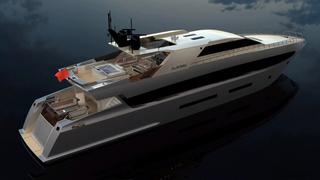 On January 19th 2011 I reported that Marc Haendle at Ocean Independence had seen a €1.4 million price reduction on the 42m new build motor yacht Anatomic and now I learn of a further €2 million drop.

To be built at Italy’s Tiranian Yachts to a design by Eurocraft, her interior, by Egg & Dart, will accommodate 10 guests in five cabins, with completion 12 months away from signature of contract. The twin 4000hp MTU engines have already been installed and she is predicted to reach a maximum speed of 26 knots, with a range of 700 nautical miles at 24 knots.

Anatomic is being built to Lloyds class and will be MCA compliant, with an asking price down from €16.5 million to €14.5 million.