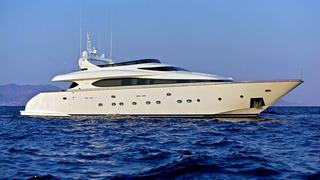 Built by Maiora in 2002, she accommodates eight guests in a master suite, VIP stateroom and two twin cabins with Pullman berths. Twin 2,000hp MTU engines with only 950 hours on them give her a cruising speed of 22 knots and a top speed of 28 knots. Ana Marta U has a large flybridge with a helm station, wet bar, solarium and Bimini top while notable features include hot and cold showers on the swimming platform and flybridge plus a Bose sound system throughout.

Lying in Barcelona, Spain, Ana Marta U is asking €2.8 million.