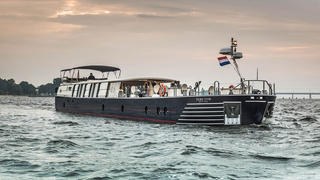 Sold in March 2017, the 29.75 metre river barge Tigre D’Or is back on the market, renamed Savvy and listed for sale by Peter Insull at Peter Insull’s Yacht Marketing.

Built in steel by Dutch yard Hakvoort, Savvy was delivered in 2004, combining the tranquillity of a traditional river barge with the facilities of a fine motor yacht. She went on to win an award for the best power yacht from 23 metres to 32 metres at the 2015 International Superyacht Society Awards. Featuring a contemporary interior by H2 Design, she offers a full width master suite with en suite bathroom and a further two en suite twin cabins, one of which converts into an office area. There is also accommodation for four crew members aboard this yacht for sale.

The cosy lounge area has comfortable seating and an entertainment centre including a pop-up flatscreen television set while outdoors there are elegant seating areas, teak decks and a Jacuzzi.

With her extremely low draft, she was especially designed and built for cruising inland waterways and is perfectly suited for even the shallowest waters.

Peter Insull comments: "I really enjoy the association with a yacht that is outside of the norm and offers something different. Savvy ticks all the boxes for me.”