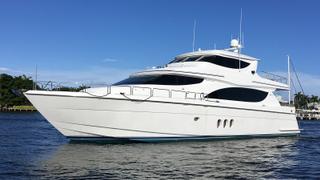 The 24.32 metre motor yacht Lexus Lady has changed central agencies and is now listed for sale by Mike Scalisi at HMY Yacht Sales.

Built in GRP by US yard Hatteras, Lexus Lady was delivered in 2012 as a Hatteras 80 flybridge model. An interior panelled in African mahogany accommodates eight guests in four cabins consisting of a master suite, VIP suite, a port double and starboard twin, all with entertainment centres, Samsung HD television screens and en-suite bathroom facilities. There are also quarters for two crew aboard this yacht for sale.

In the main saloon, slightly forward to starboard is a custom crescent-shaped bar with a fridge, ice maker and four bar stools along with comfortable seating and an entertainment centre including a 46-inch Samsung HD television screen and a stereo surround sound system. Forward is a dining area with seating for eight guests and cabinetry for glassware, china and silver.

On the aft deck there is a dining area and wet bar to starboard with access to the flybridge, and stairs port and starboard leading to the swim platform. On the flybridge itself is a full complement of enclosure panels beneath the hard top, enabling the entire area to be air conditioned while guest amenities include a bar, three bar stools, an L-shaped settee and two dining tables. Twin 1,600hp Caterpillar diesel engines give her a cruising speed of 18 knots and a maximum speed of 22 knots.