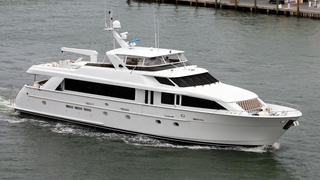 Hatteras motor yacht Supernova back on the market

Sold in January 2017, the 30.4 metre motor yacht Supernova is back on the market, jointly listed for sale by Ocean Independence with Allied Marine.

Built in GRP by US yard Hatteras, Supernova was delivered in 2003 and received a full refit in 2014. A sumptuous interior in rich cherry wood accommodates eight guests in four cabins consisting of a full-beam master suite, VIP suite, double and twin, all with entertainment centres, flatscreen televisions and en-suite bathroom facilities. In addition, four crew are accommodated in two cabins aboard this yacht for sale.

The large saloon has a lounge area with neutral-coloured carpets, settees and ottomans, and comes with a granite-topped sunken wet bar and a floor to ceiling entertainment centre including a 42-inch Sony flatscreen television and a Yamaha stereo surround sound system. Forward, the formal dining area seats up to eight guests beneath a coffered, mirrored ceiling.

The aft deck is set up for al fresco entertaining and dining with built-in bench seating, two tables and four teak chairs, while up on the flybridge there are two Stidd helm chairs, a wet bar in black marble and four bar stools, plus port and starboard seating partially shaded by a hard top.

Twin 1,800hp MTU diesel engines give her a cruising speed of 20 knots and she is fitted with Naiad zero speed stabilisers.

Lying in Fort Lauderdale, Florida, Supernova is asking $3,750,000 with US duty paid.