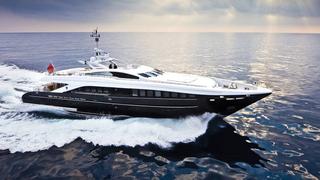 The 37.3 metre motor yacht Perle Noire, listed for sale with Moran Yacht & Ship, has been sold in an in house deal.

Built in aluminium by Dutch yard Heesen to an exterior and interior design by Omega Architects, she was delivered in 2010 as one of the yard’s 3700 series and went on to become a finalist at the 2011 ShowBoats Design Awards. MCA compliant, accommodation is for 12 guests in five cabins consisting of a full beam main deck master suite, VIP suite a double and two twins, all with DVD players, television screens and full en suite bathroom facilities.

Her stylish interior has a main saloon with comfortable seating on freestanding long couches and armchairs, a bar, coffee tables and an entertainment centre including a large Sony television screen with Bose surround sound. Forward is a formal dining area with seating for eight guests and cabinetry for storage of cutlery, glassware and crockery.

The partially shaded aft deck has al fresco entertaining and dining on built in upholstered seating in front of two tables with music piped in via two waterproof speakers. The huge sun deck comes complete with a wet bar, four person spa pool, Tepanyaki grill, ice maker and fridge, along with no fewer than six waterproof speakers. There is also another very private conversation and seating area on the foredeck. Twin MTU 4000 M90 engines give her a cruising speed of 28 knots and a range of 2,000 nautical miles at 12 knots.