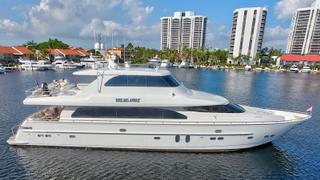 The 25.9 metre skylounge motor yacht, Helm’s Away, listed for sale by Wayne Cannava at Gilman Yachts, has been sold in an in-house deal.

Built in GRP in 2006 and delivered in 2007 by Horizon Yachts, she was reputedly the most highly customized 85-foot Horizon on the market. Helm’s Away features a four-cabin layout for eight guests in a master suite, two doubles and a twin cabin, plus quarters for two crew situated aft.

She has a large main saloon/dining area with ample seating and a 50-inch Pioneer flatscreen television with an upgraded Bose LS48 audio stereo surround sound system and a state-of-the-art gourmet kitchen.

The enclosed skylounge has a centreline helm station with holly flooring and upgraded electronics, while aft is a carpeted area with raised seating for up to eight guests, a cocktail bar and a pop-up 50-inch television. The expansive aft deck has bench seating and an oversized teak table for al fresco dining. A few steps down is the hydraulic swim platform with a hot and cold shower and underwater lights. Additional features include ABT zero-speed stabilisers, ABT bow and stern thrusters, twin Kohler 32KW generators and a watermaker.

Her cruising speed is 18 knots and a maximum speed of 22 knots comes courtesy of twin 1,825hp Caterpillar diesel engines.