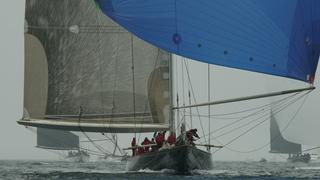 The winner of the second race in the J Class regatta in Falmouth was the boat which took the lead in the early part of the first beat and never lost it - just as it was in the first - but this time it was Velsheda’s turn. The wind was in the southeast, steadier in strength than yesterday, but regularly swinging through twenty degrees according to Ranger’s navigator Godfrey Cray. The morning fog which hung over Falmouth Bay cleared just an hour before the start, but low cloud continued to obscure the top of the Js’ sails at times.

Velsheda was five minutes ahead at the first windward mark and wasn’t really challenged from then on. 'We won the start and got the first shift,' says Todd Dodson, Velsheda’s tactician. 'After that we were able to sail our own race while the guys behind us were having a bit of a scrap. The owner did a great job of helming the boat.' On the second beat Ranger, Rainbow and Lionheart all went left, allowing Velsheda to cover them all and consolidate her position. Just as the boats were rounding the final leeward mark, however, the visibility closed in and tactical covering was no longer possible.

'We lost sight of the other boats,' Dodson says, 'so we had to guess what they were doing and stay a bit conservative.' The race was shortened at the end of that leg for safety reasons and Velsheda crossed the finishing line over four minutes ahead of the next boat.

Rainbow had a disappointing start after arriving at the line too early and having to gybe round the back of the other boats, but overtook Lionheart on the first beat. With Ranger in second place, that remained the order until the final foggy beat.

Lionheart, trailing Rainbow by just three boat lengths, tacked off to port while Ranger and Rainbow went right. When they came together again at the finish, Lionheart had not only overtaken Rainbow, she had almost caught Ranger, with the three of them finishing within eighty seconds of each other.'That leg was quite nerve-racking,' comments Cray.

Lionheart’s protest regarding the positioning of a mark on Tuesday was upheld, but the amount of redress due to her is still being considered.