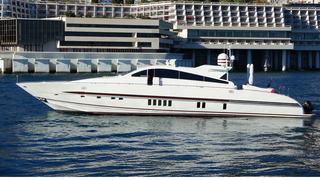 The enigmatically named 27 metre motor yacht GLNM has been listed for sale by Lillo Mazzetti at Thompson Westwood & White.

GLMN was built in GRP by the Italian yard Arno to a design by Paolo Caliari and delivered in 2004 as a Leopard model with many technical upgrades since. Accommodation is for up to nine guests in four cabins consisting of a master suite, VIP suite, a double and a twin with a Pullman berth and all cabins have television screens and full en suite bathroom facilities. There are also two cabins for three crew aft aboard this yacht for sale.

The main saloon is a generous size, filled with light, and has comfortable seating, a bar and an entertainment centre featuring a Linn home cinema with a Fujitsu television screen and surround sound system.

Exterior areas are generous and feature a large open aft deck and a forepeak with four sun pads with cushions which are perfect spots for lounging in the sun. The forepeak lounging area additionally benefits from a folding Bimini top. Inside, the large windows in the upper saloon and an electric retractable roof offer the interior a feeling of space as well as great views. There is an additional cozy lounging area below deck with an LCD television screen.

Twin 2,000hp MTU diesel engines connected to Arneson surface drives and a planing hull give her a comfortable cruising speed of 34 knots.