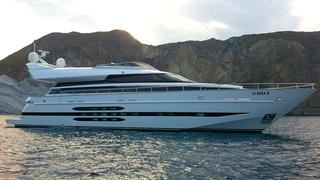 That's 192 sales so far this year as Victor Iliadis at Marine Marketing tells me he's sold the 27.93m motor yacht Aleica to a direct client.

An Akhir 90 model built by Cantieri di Pisa in 2010 to RINA class, Aleica sleeps nine guests in four staterooms and twin 2000hp engines give her a cruising speed of 24 knots.