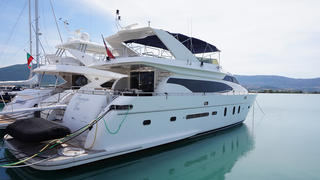 The 25 metre motor yacht Premier Cru, listed for sale by Ted Smith at Ancasta Yachts, has been sold in-house.

Built in GRP by Taiwanese yard Kha-Shing, Premier Cru was delivered in 2006 as a Monte Fino model. A contemporary interior with cherry wood panelling accommodates eight guests in four cabins consisting of a full beam master suite, VIP suite, double and twin. All cabins have entertainment centres and en suite bathroom facilities while the master also has a 26 inch television screen on a rise and fall mechanism. In addition, there are quarters for two crew.

In the main saloon there are curved cream leather settees to port and starboard, neutral cream carpeting and an entertainment centre including a 42 inch plasma television screen. Forward is a formal dining area with seating for eight guests.

The aft deck has built in upholstered seating and a large al fresco dining table for eight while up on the flybridge is a Jacuzzi spa tub, fridge, barbecue grill and seating with a table for eight, protected by a full Bimini top. Twin MAN 1,300hp diesel engines give her a cruising speed of 18 knots and she is fitted with hydraulic bow and stern thrusters.