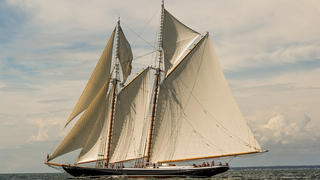 The 43 metre new build sailing yacht Columbia II has been listed for sale by AJ MacDonald and John Weller at Camper & Nicholsons.

Currently in build with a steel hull at US yard Eastern Shipyard Group, she is hull number two of a replica of the classic Gloucester fishing schooner Columbia, designed by W Starling Burgess and delivered in 1923. The first replica was delivered in 2014 and has proved to be an outstanding success as a long range cruising yacht.

The original Columbia was built as a pure fishing boat without such niceties as a saloon, guest cabins or an engine room and her navigation equipment consisted only of a compass and a barometer. When she was caught in a hurricane off Nova Scotia in August 1927 her pitiful shortcomings were exposed as she foundered with the loss of 25 crew.

However, the new replica is a different matter altogether and has state of the art navigation equipment, air conditioning and all mod cons. The interior is in mahogany and accommodation is currently configured for 12 guests in four cabins consisting of a master and VIP with Pullman berths and two twins with bunks and Pullman berths. However, a new owner has complete freedom to decide on a new accommodation layout before an anticipated delivery in 2017.

The open plan main saloon of this yacht for sale has seating on comfortable settees to starboard, a dining area for 10 guests to port, a bar, fridge, ice maker, wine cooler and an entertainment centre including a 46 inch HD television screen.

A single 587hp Caterpillar diesel engine will give her a cruising speed of 10 knots and a range of 4,000 nautical miles.

Available to view at the yard in Florida, Columbia II is asking $21.5 million.