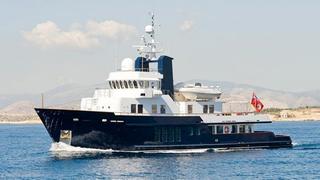 Chuck MacMahon at Northrop & Johnson tells me that he has joined Maarten Ten Holter at Vripack to list the 36.58m expedition yacht Private Lives, and that her price has been reduced.

She was designed by Vripack and built by RMK Marine in 2003. Intended for extended cruising she has a range of 5,000 nautical miles at 11 knots. Stable and strongly built to Lloyds class and MCA compliant, Private Lives has a very spacious and luxurious interior with accommodation for 10 guests in a master, two double and two twin cabins.

Private Lives was previously asking €7.95 million, but is now priced at $9,875,000, which equates to a drop of around $200,000. She is currently en route to South Florida, where she will be based for the foreseeable future, and she will be on display at the Miami Boat Show next month.