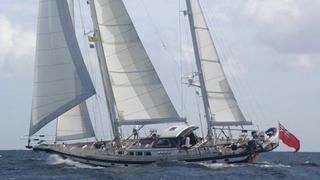 Here's news of another sailing yacht on the market as Marc Haendle at Ocean Independence signs a central agency for sale on the 23.55m Kemmuna.

Built by Jongert in 1994 to an in-house design, she sleeps six guests in a master stateroom and two double-bunked cabins, all en-suite, plus two crew. A single 220hp MTU engine gives her a cruising speed of 8 knots under power and she was refitted in winter 2006/2007.