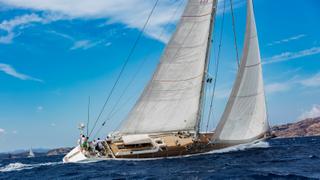 The 28.02 metre sailing yacht Diablesse, listed for sale by Tomaso Polli at Edmiston & Company, has had a price reduction of €650,000.

Built in aluminium by France's Trehard yard to a design by Martin Francis, she was delivered in 1985 and at the time was the largest sloop in the world. A superior interior has varnished light blond maple wood joinery accommodating up to seven guests in three cabins. The master suite is forward to starboard and has an office area while to port and starboard are two double berths with Pullman berths. All cabins have entertainment centres and en suite shower facilities. In addition, there are quarters for four crew aboard this yacht for sale.

Features include a reverse transom with built in teak covered steps leading down to a small swimming platform and she has a 34 metre aluminium mast along with a Hood white painted Smartboom for high performance sailing.

The cosy saloon has U-shaped seating around a coffee table converting to a dining table and there is an entertainment centre with a large flat screen television set.

The massive rear cockpit is fully sheltered by a large awning and comes with port and starboard built in upholstered seating and a fold-down dining table for al fresco meals.

Last refitted in 2016/17, Diablesse is a proven world cruising yacht, having completed three circumnavigations and visited over 60 countries with her previous owners. A single Yanmar turbo diesel engine gives her a cruising speed of 8.5 knots.