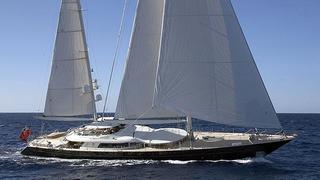 There's been a rumour that another large sailing yacht was sold in June, the 52m sailing yacht Galaxia, listed at Yachting Partners International. Neither the yacht's central agent, Matt Albert at YPI, nor Simon Goldsworthy (whom the rumour has it is possibly representing the buyer) at Camper & Nicholsons, would comment, so we are taking it to be true. If so, she is the largest sailing yacht sold so far in 2012.

Launched to much acclaim in 1997 in Viareggio under the name Liberty by renowned Italian yard Perini Navi, the 52m twin screw Bermudian ketch Galaxia is the yacht that re-wrote the book for large flybridge sailing yachts and raised the standard for all sailing yachts to come.

With a beam of 11.4m, Galaxia comfortably accommodates up to 12 guests in five cabins. Fitted with the very latest entertainment and communications systems following her extensive refit in 2006-7, she has a range of over 4,000 nautical miles at an economical cruising speed of 10 knots.

Galaxia's asking price at the time of her sale was $22 million.