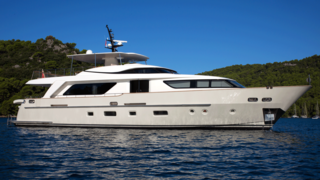 The 27.6 metre motor yacht Noor, listed for sale by Kirill Anissimov and Antoine Larricq at Fraser, has been sold with Richard Inwards at Inwards Marine introducing the buyer.

Designed by Francesco Paszkowski, she was built in GRP by Italian yard Sanlorenzo to RINA class and delivered in 2014 as one of the yard’s SD92 models.

She is MCA compliant and can accommodate seven guests in four cabins consisting of a main deck master suite, two VIP suites and a single cabin, all with entertainment centres, television screens and en suite bathroom facilities. In addition, there is a further en suite cabin currently used as a gymnasium and there are quarters for four crew in three cabins.

The saloon, decorated in soothing white lacquered wooden panelling, has a large L-shaped settee to port facing a sophisticated entertainment centre including a 46 inch Samsung television screen and a Bose stereo surround sound system, and there is a semi-formal dining area forward with cabinet storage for glassware, china and silver.

The sheltered aft deck has built in upholstered seating and a large table for al fresco dining, while the flybridge offers further outdoor dining and lounging areas as well as a helm station.