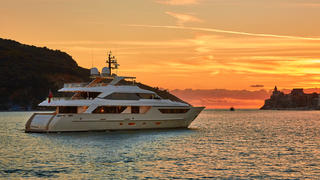 The 38.4 metre Sanlorenzo motor yacht To-Tok has been sold in an in-house deal with yachtBlue acting for both the buyer and seller.

Delivered in 2015, this GRP superyacht was designed by Francesco Paszkowski and is the first hull of the SD126 series.

To-Tok’s stand out features include a saloon terrace that folds down to create an outdoor area next to the saloon, larger windows and an expanded swim platform. She has a Jacuzzi nestled in her bow, a flybridge Jacuzzi and lots of seating on her upper deck and aft deck for relaxing outdoors.

Her naval architecture was completed in house at Sanlorenzo, and she can reach a top speed of 17 knots thanks to her two diesel C-32 ACERT Caterpillar engines. With a cruising speed of 11 knots, she has a range of 3,000nm.

The interior of To-Tok spans three decks and accommodates twelve guests in five suites. The master suite is located on-deck and includes a king size bed, a skylight and an office. The room is flanked by two gull wing doors to port and starboard and equipped with an en suite that boasts a steam shower, rain shower and a reclining shower. The other accommodation is located on the lower deck and consists of two VIP rooms and two guest rooms.

To-Tok’s interior, which is styled in light-grey, neutral colours, is bright and spacious and complemented by contemporary furnishings by Molteni, FLOS and Minotti. She features a number of highlights such as a relaxed sky lounge, a comfortable main saloon and a dining area for 12 off the saloon.