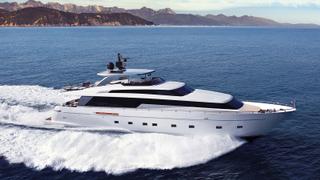 The 31.7 metre motor yacht Zulu, listed for sale by Alan Gulliver at Sanlorenzo Spain, has been sold in an in-house deal.

Zulu was built in GRP by Italian yard Sanlorenzo and delivered in 2010 with exterior styling by Francesco Paszkowski and an innovative interior design by Rodolfo Dordoni. She was the first hull of the Sanlorenzo SL104 model, which later became known as the SL106 model, of which over thirty units have been built and delivered to date.

In contrast to the traditional main deck cabin configuration, her first owner opted to redesign her forward main deck, which has been used as a well-appointed dining area for entertaining guests. On her lower deck a custom four cabin layout of a master suite, VIP suite, a double and a single, all with en suite facilities, accommodates seven guests. There is additional crew accommodation for five crew members across three cabins.

Materials and décor were carefully selected by her first owner and renowned Italian architect Rodolfo Dordoni, and as a result, a unique blend of oxidised bronze panels, Georgette marble, teak flooring and Minotti fabrics contribute to a unique interior environment which is an example of the ‘made-to-measure’ customisation for which Sanlorenzo is known.

Powered by twin MTU 16V2000M93 2,435hp engines, she is capable of achieving a top speed of 29 knots and is fitted with a zero speed stabilisation system.

The asking price of Zulu has been withheld.