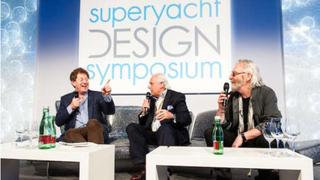 The Superyacht Design Symposium returns to the Tyrolean Alps in Kitzbühel, Austria, from 22 to 24 February, 2015, with an inspiring panel of expert speakers – from inside the yachting industry and out – already confirmed for the seventh edition.

Yacht design legends Terence Disdale and Andrew Winch will once again take to the Symposium stage, alongside award-winning yacht stylists Espen Øino and Peder Eidsgaard to debate which should come first – exterior or interior design.

Remi Tessier will share his thoughts on where art and craftmanship meet interior design, whilst Vienna Eleuteri, sustainability manager at Viareggio Superyachts and president of Eulabor Institute will lead discussions on responsible and sustainable yachting. She will be joined by the visionary yacht designer Philippe Briand who will share his experiences from a recent green sailing boat project. Celine Cousteau, daughter of Jacques Cousteau and leading marine environmentalist and filmmaker, will join them for this important panel discussion.

As well as welcoming a collection of the yacht industry’s most esteemed designers, we are delighted to present a number of expert speakers from the wider art and design world who will add fresh perspectives to a diverse range of design-focused topics.

Recent architectural projects include the Conservatorium Hotel (2011-2012) in Amsterdam; Mamilla Hotel in Jerusalem (2009); Mitsui Garden Hotel in Tokyo (2005); the renovation of the historic Teatro Nazionale in Milan (2009), and an eight-storey Benetton Store in Istanbul (2009), with a number of worldwide projects in development including the Al Zorah Resort Hotel in the United Arab Emirates and a complex of condos and villas for The Ritz-Carlton Residences in Miami Beach.

James O’Callaghan, the Director at Eckersley O’Callaghan, also joins the list of speakers at the Symposium. James and Brian Eckersley formed the structural design consultancy Eckersley O’Callaghan in 2004, a pioneering engineering practice that truly integrates architecture and engineering. The practice has offices in London, New York, Paris, and Shanghai and is active globally. Acknowledged as an authority on the structural use of glass, O’Callaghan is best known for his highly innovative glass stairs, bridges, facades and other structural elements in Apple’s flagship retail stores around the world.

Increasingly yacht owners want to create a greater connection with the outdoors through large-format glazing or striking features such as canopies, stairs or swimming pools. O’Callaghan’s specialism in glass engineering and applications is sought after by some of the world’s top yacht designers and makers to develop more creative and intelligent glass solutions to a developing yacht design aesthetic.

Lady Tina Green, superyacht owner and co-founder of Green & Mingarelli Design, is married to the retail businessman, Sir Philip Green. Together they have owned a number of superyachts over the years. As a young adult, Tina pursued a career in the diamond industry where she met her former late husband. Together they moved to South Africa where Tina opened her first fashion boutique in Johannesburg. After moving back to London, Tina married Sir Philip Green and successfully opened another fashion boutique in Sloane Street.

With the rapid growth and expansion of her husband’s department stores, Tina started designing the layouts, shopfits and interiors of the stores eventually designing full homeware stores for one of the department chains and thus began her career as a serious and recognized interior designer.

Fourteen years ago a project to build a 36m ISA yacht led her to meet Pietro Mingarelli, an established architect, designer and builder. It was at this point that their successful partnership was born and a collaboration of their vision and design has accumulated in the completion of yachts, apartments, houses and planes around the globe.

Now an independent art dealer based in London, Adrian Sassoon has spent twenty years in the art world, having also worked at the J. Paul Getty Museum. Adrian focuses on the sale and promotion of two main categories: Sèvres porcelain (and other important antique continental porcelain) and leading contemporary decorative arts (studio ceramics, glass, metalwork and jewellery), as well as working as an art adviser. He has advised a number of superyacht owners with respect to the placing of artwork in their yachts. Sassoon is also a trustee of the Wallace Collection, London, and of the Hermitage Foundation UK.

In addition to two days of inspiring presentation and debate, the Symposium programme also provides a host of social occasions and networking opportunities including an elegant cocktail reception hosted at the exclusive Kitzbühel Country Club, the exhilarating Blohm+Voss Ski Cup and the much-anticipated ShowBoats Design Awards Prize Giving and Celebration Party.