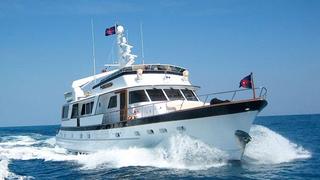 Bob Zarchen at Ardell tells me he's closed on the sale of the 24.3m motor yacht Nobility with Sparkman & Stephens representing the buyer.

Built in aluminium in 1974 by Burger, she’s been scrupulously maintained and regularly upgraded, including the addition of a flybridge in 1994. Accommodation is for six guests in three double staterooms plus three to four crew and twin 485hp Detroit Diesel engines give her a cruising speed of 12 knots.