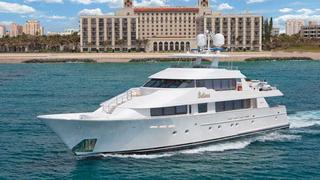 Superyacht Believe is back on the market with a price drop

Bob Cury at RJC Yacht Sales reports that superyacht Believe is back for sale after a $1 million price cut.

She was designed by Bill Garden and Greg Marshall, with an interior from Sheryl Guyan of Pacific Custom Interiors. She's equipped with twin MTU 12V 2000 M90 engines, allowing top speeds of 28-plus knots.

Her interior accommodation consists of five staterooms including an on-deck master stateroom and two VIP king-size staterooms with en suite bathrooms below. Her skylounge boasts a home theater with 63" TV and she has Kaleidescape system throughout.

Upgrades over the years include a new exterior paint job by Rybovich in 2010, new soft goods inside, three new waverunners, Jastrom digital steering and Asea seamless power transfer, and her custom hot tub was relocated to the bow.

Believe is listed for sale by Robert J. Cury & Associates, asking $9.9 million. She will be featured in the RJC display at the Hyatt Pier 66 face dock during the upcoming Fort Lauderdale boat show.