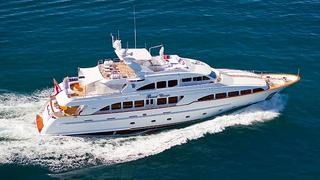 Another central agency change now as Albert Prego at YachtBlue sends word that he's taken over the listing of the 35.1m motor yacht Grand Coroto.

Built by Benetti in 2001 to a design by Stefano Righini and ABS classed, she had an extensive $2 million refit in March 2012. An interior by François Zuretti in cherrywood accommodates 10 guests in five staterooms including a master suite on the main deck.

The saloon features two sofas to port, a large central coffee table, two club chairs, a card table as well as 42″ plasma TV. To starboard is an entrance foyer and stairs leading to the guest accommodation on the lower deck.

On the bridge deck aft of the pilothouse is the full-beam skylounge with bar forward, convertible sofas, cocktail table and club chairs.