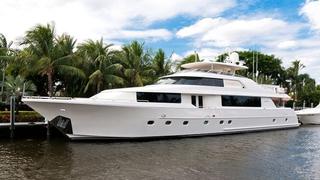 Superyachts Georgia and Sovereign new to the market at Northrop & Johnson

Kevin Merrigan at Northrop & Johnson gives me the green light to broadcast the news that he and Wes Sanford have signed two Westport motor yachts for sale, the 34.14m Georgia and 39.62m Sovereign.

Firstly let's look at Georgia - built in 2010 to a Jack Sarin design, she's only a year old and is offered by her original owner with only 400 hours on her twin 2000hp MTU engines. With accommodation for eight guests and a cruising speed of 21 knots, Georgia is asking $8.995 million and is easily viewed in Fort Lauderdale.

Then there's Sovereign - designed by William Garden and delivered in July 2008, she's also on the market by her original owner. Never chartered and sleeping 10 guests in five staterooms, twin 2735hp MTU engines give her a cruising speed of 20 knots and Sovereign is asking $13.45 million.