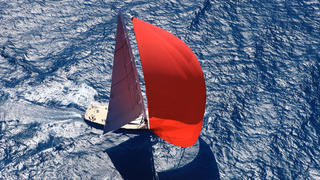 The 27.7 metre sailing yacht Alix has had a central agency change and is now jointly listed for sale by Nautor’s Swan Brokerage and Ocean Independence.

Built in carbon fibre by Finnish yard Nautor’s Swan to a design by German Frers, she was delivered in 2009 as a high performance yacht and received a range of upgrades in 2014/2015. An interior in wenge wood and tinted oak accommodates eight guests in four cabins consisting of a master suite aft, port and starboard twins and a double cabin forward, all with full en suite facilities. Notably, there are seven hull windows in total: two in the saloon, two in the owner’s cabin and one in each of the guest cabins.

Dining in the saloon is for eight persons on the port side with a U-shaped settee and a large rectangular dining table plus two chairs. A coffee table on the starboard side is positioned in front of a four person settee. There is also an entertainment centre including a large Sony television screen and a Bose server offering on demand audio and video.

Alix is a semi raised saloon version offering one cockpit extending from the saloon entrance back to the helm with no bridge, allowing a more spacious deck area for entertainment and relaxation al fresco. The aft cockpit is recessed into the deck, while the forward cockpit with two U-shaped settees has two carbon cockpit tables for outdoor cocktails and dining.

The transom door of this yacht for sale doubles as a bathing and boarding platform and is hydraulically operated by two custom built stainless steel rams. Under power, a single VW 230hp engine gives her a cruising speed of 10 knots.