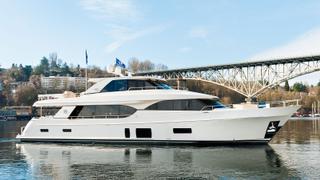 Two new 30.4 metre Ocean Alexander 100 superyachts, listed for sale by Alexander Marine USA, have been sold, one in an in-house deal and the second with the buyer introduced by MarineMax.

Built in GRP by Taiwanese yard Ocean Alexander, both were delivered earlier in 2018 as Skylounge models. Accommodation in an interior designed by Evan K Marshall is for eight guests in four cabins. This comprises a split level master suite, VIP suite, double and a twin, all with entertainment centres, LED television screens and en suite bathroom facilities.

The Skylounge model is one of two options in the Ocean Alexander 100 motor yacht line-up, and differs from the flybridge model in that it has an enclosed skylounge saloon on the top deck rather than an open flybridge helm.

The skylounge is enclosed in glass, which protects the area from the elements while flooding it with natural light. It features a saloon with an L-shaped sofa and coffee table, plus an area for formal dining that seats eight aft. There is also an enclosed galley, forward of which is a country kitchen with room for guests to relax or enjoy casual meals.

The main deck saloon is open-plan and features a custom L-shaped settee and chairs on wooden floors, a wet bar, wine cooler, ice maker and an entertainment centre including a 60-inch LED television screen and a professional sound system.