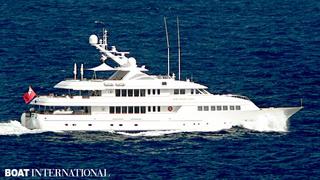 Update on sale of Northern Light by Burgess and YPI

Following the news from Burgess that they acted for the buyer in last week's sale of the 46m Feadship Northern Light, Matt Albert at Yachting Partners International writes in to say he represented the seller.

Built at the Van Lent yard in 2001, she has a classic John Munford interior finished in timeless style with rich mahogany panelling offset by pale fabrics and carpeting. Accommodation is for 10 guests in a master, two double and two twin cabins.

She has a range of 4,500 nautical miles at her cruising speed of 13 knots. A refit in 2005/2006 saw zero speed stabilisers installed, a full repaint and all exterior fabrics replaced.

Northern Light was not officially on the market.