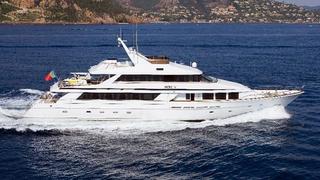 Buily by Lloyds Ships in 1990 to a design by Phil Curran, Bernie says she's now been under the same ownership for 20 years and has served well as both a private and charter yacht. Accommodation is for 10 guests in an owner's suite and four staterooms while she's powered by twin 1750hp Caterpillar engines.

Lying in the South of France, Ineke IV is asking €3.25 million.