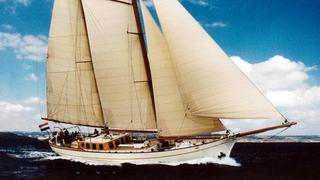 Originally built in 1916 as one of the Dutch North Sea pilot schooners, she was totally rebuilt to luxury yacht standards during 1995/99 and had a further refit in 2010/11. Accommodation is in a master stateroom and three guest cabins while power comes from a 316hp Scania engine.