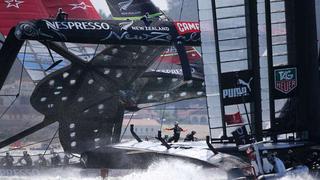 Video: Near capsize and close finishes over weekend in 34th America's Cup

This weekend saw some of the most heart-stopping racing action during the 34th America's Cup as Team Emirates New Zealand sustained a near capsize and Oracle Team USA bounced back to score its first official points in the series.

Cup Defender Oracle Team USA won Race 8 when Challenger Team Emirates New Zealand nearly capsized on the upwind leg. During a starboard tack, the wing didn't pop through causing the New Zealand team's AC72 to stand up nearly vertical (see video below). 'We got about as close as you can possibly get to having the thing end up on its side,' says Emirates Team New Zealand skipper Dean Barker, who was stuck in the leeward hull looking up at the rest of the 46-foot wide catamaran. 'We’re all good; disappointed to let the lead go. They got nicely out of phase and chipped away. We didn't get the hydraulics and if the wing doesn't tack when the boat does, you're in trouble. Fortunately, the boat came up and no collision with the other guys.'

The next day's racing was split with Oracle Team USA winning Race 9 by 47 seconds and Emirates Team New Zealand winning Race 10 by a close 16 seconds. Oracle's win brought the challenger into the black with one point, cancelling out its two-point negative score from the penalty incurred before Cup Finals began. Race 10 proved to be one of the most thrilling of the series, with teams reaching speeds in excess of 70 knots and the lead changing hands four times over the 10-nautical-mile racecourse.

Now Team Emirates New Zealand leads on the scoreboard 7 to 1. The winner of the 34th America's Cup Final is the first to reach nine points. For New Zealand, this only means two races while USA still must win eight. Racing will resume with Race 11 and 12 on Tuesday, 17 September.