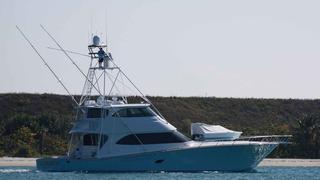 The 25 metre sportfish Norby has been sold with Frank Grzeszczak and Katya Jaimes at IYC acting for the buyer and seller.

Built in GRP by US yard Viking, Norby was delivered in 2010 and upgraded in 2015. She is decorated in custom wallpaper throughout and a accommodates 10 guests in five cabins consisting of a master suite, VIP suite and three twin cabins, all with en suite bathroom facilities. In addition, there are Samsung television screens in the master and VIP suites and there are quarters for two crew.

The saloon has comfortable seating in front of an entertainment centre including a 55 inch television screen on a rise and fall mechanism, A neat touch is recessed overhead LED lighting and there is a formal dining area with a large table. The custom island galley layout includes a KitchenAid oven and Sub-Zero refrigeration and freezers.

The cockpit is fully kitted out for serious game fishing, including a live bait well, bait freezers, rod holders, a Bluewater fighting chair and, when hunger strikes, a Gaggenau electric grill. The air conditioned enclosed flybridge has a single Stidd helm chair forward while aft is a raised settee and a 37 inch pop up television screen.