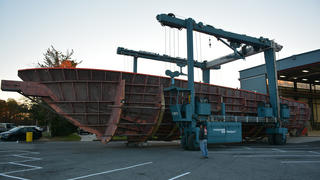 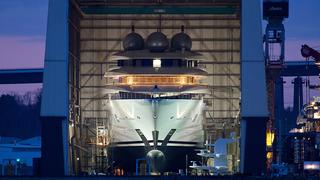 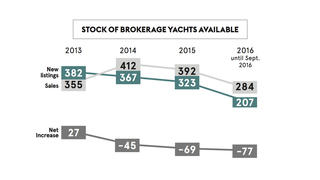 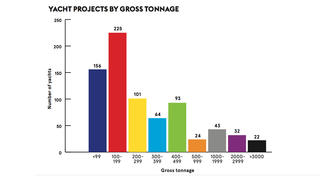 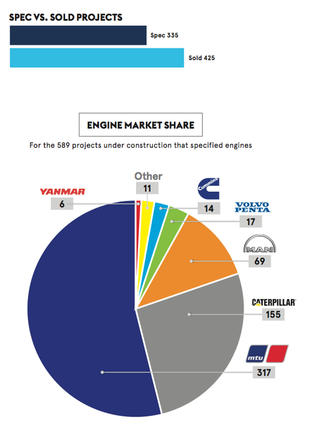 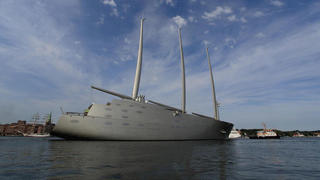 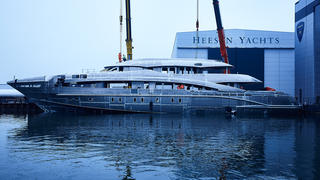 The headline for this year’s Global Order Book should be “steady as she goes” despite market jitters and some continued consolidation. After a few years of contraction, last year’s report showed stabilisation, which continues this year.

The 2017 report shows the total number of yachts on order, under construction or on hold as 760, five more projects than last year or a very modest increase of 0.7 percent.

This PDF is locked
The file “2017 Global Order Book” is available for download to BOAT Pro subscribers only. Please login or subscribe to BOAT Pro to access it.
Get Started What is BOAT Pro?

The average size is identical to last year — 40.84 metres — and the leading yachtbuilding country and yard remain Italy and the Azimut Benetti Group in terms of number of projects and the total length they represent.

Worldwide, the top nine yachtbuilding countries are the same with no major change, except for Germany, which shows a marked increase this year. This doesn’t reflect a sudden spike in business at German yards but confirms the good health of the very large-project segment, a specialty of builders such as Lürssen, and the emergence of confidential projects that were unaccounted for last year.

The production level in the other countries remains steady with some slight increases but no major peaks. Taiwanese yards continue on the upward trend that we noted in 2016’s Order Book, and in the U.S., a couple of builders, most notably Viking, are helping keep overall production numbers steady in that country.

When looking at the production in terms of total length, Azimut Benetti is still the clear leader with a total project length of 8,500 feet (similar to last year). The Ferretti Group follows in second place and Sanlorenzo in third place, but both have reported a strong increase in production.

They are followed by Lürssen, which moves into the top 5 in fourth place, and Ocean Alexander in fifth. Like last year, Feadship is missing from the top builders’ list but only because the Dutch yard waits until its projects are in the fit-out stage before announcing them.

For a more comprehensive view, this year we are also taking a look at gross tonnage. It is interesting to note what a difference this makes among the nine leading yachtbuilding countries. Not surprisingly, given the German yards’ focus on very large projects and Lürssen’s order book (which alone includes seven projects over 100 metres), Germany takes the No. 1 spot, ahead of Italy, which is followed by the Netherlands, Turkey and the U.S.

American production shows relative stability and there has been some good news with new orders at Delta Marine and the Brooklin Boat Yard, but it’s the uniquely American sportfishing market that has saved the day. New Jersey-based Viking, for instance, has launched 12 hulls in its Viking 92 series in two years. However, sportfisher production is historically erratic and likely won’t continue at its current high level.

A drop in production in that segment could reveal the vulnerable state of the American yachtbuilding industry. Viking and Hatteras’ new semi-custom motor yacht series need to be successful in the coming years in order to maintain the current level of production.

While the American new-build segment is not particularly impressive, the brokerage market is. Forty-six percent of the year’s brokerage sales stem from the U.S. American clients are buying both the largest yachts (most of them built in Europe) and the smallest ones, a majority of them built in Taiwan and Europe. The average length of the yachts sold and the average asking price were higher this year.

While the fourth-quarter numbers were not accounted for at the time of this report (and last year’s final quarter was particularly strong), the overall pace of sales indicates that we should see relative stability for the entire period. A good number of new brokerage companies recently entered the market, which historically has been a positive sign.

Within the new-build sector, it’s the large-yacht segment that continues to impress. Orders of yachts exceeding 250 feet in length has reached a record level with 52 projects and this year’s report shows, again, 21 superyachts over 100 metres under construction.

The two categories that record the biggest growth are at both ends of the market. The yachts over 200 feet category has 13 more orders this year, a 16 percent increase, while there are 36 more orders than last year in the under 100 foot category, a 14 percent increase. Expedition yachts continue to be in demand and their production level remains steady following the growth last year.

In fact, the only decline is seen in the sailing category, down by 12 percent. Whether this represents a worrying trend remains to be seen. If we have a look at the entire sailing yacht market, including brokerage sales, the numbers are the same every year — 50 yachts — and that holds true in 2016. In addition, some very good news was announced at the end of the year: two new Wally projects, an 81 metre project at Royal Huisman and a new custom build at the Brooklin Boat Yard in the U.S., among others. It will be interesting to follow this market closely.

Building projects on speculation (in part because it reduces the time clients have to wait for new yachts) seems to have helped several yards keep their production level up. This year, we tracked sold versus spec for the first time and have established that among the 760 hulls in builds, 425 projects are sold projects while 335 are being built on speculation (the majority of them, small semi-custom motor yachts).

Even if this year’s report shows a slight increase of yachts under construction, there are good reasons to think that the global production will slightly decrease in the coming years. One reason is the availability of yachts on the brokerage market. The global fleet (of yachts 24 metres and more) will reach 10,000 units in 2017.

This, in turn, will bolster the refit activity. Currently, existing facilities are not sufficient to cater to all projects so, this year again, a number of major yards have expanded into the refit sector. The best example could be Blohm+Voss, which leased a facility in La Ciotat, France, specifically to expand its refit activity. A few months later, Lürssen bought the German yard and the two companies now not only have the most facilities in Germany but also in the Mediterranean region dedicated to this activity.

We are impressed by the order books of so-called pedigree yards that show a very comfortable level of production for the coming years. While stability is the word for this year’s Global Order Book, this niche industry should continue to become more compact in the future.

Subscribe to BOAT Pro to access brokerage sales data and unlimited specs for 12,352 yachts in our Superyacht Directory – the world’s most comprehensive superyacht data.