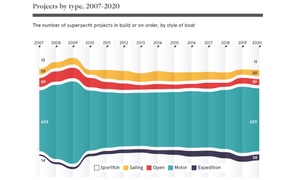 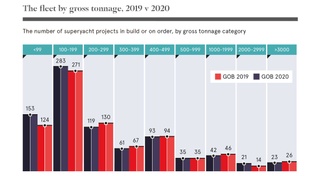 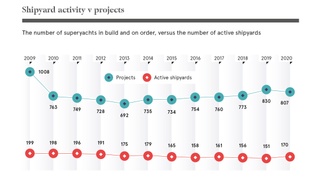 The global superyacht industry paused for breath in 2019, with the 807 projects over 24 metres ordered (with deposit taken) or under construction representing a slight dip on the 830 recorded in 2018. This brings a halt to a period of largely uninterrupted growth in the order book – from the low of 692 projects in 2013. The total length of projects this year is 32.3 kilometres, a decline of just one per cent from last year’s figures. How to interpret this year’s figures depends on your outlook: a welcome stabilisation of a potentially overheating industry or an indication that buyers and shipyards are bracing against macroeconomic headwinds? We suspect there’s truth to both positions but also note the exceptional levels of design and innovation seen in some of the projects under way – and the vision of the owners commissioning them.

We are seeing a much broader diversity of styles – particularly in the semi-custom segment – but one theme is common: clever designers are packing ever more volume into these hulls.

In terms of superyacht types, it is interesting to see the expedition category growing again (+5.45 per cent) and another year of growth in the numbers of open/sport yachts under construction. More buyers are increasingly open to the idea of long-legged cruising at displacement speeds, but there also clearly remains a market for owners who aren’t quite ready to throttle back entirely.

We also recorded some welcome news for the sailing sector this year, with the numbers of 24-metre-plus sailing yachts ordered or under construction increasing by 15.7 per cent over last year. The number of projects – 59 – is still way down on the 10-year high of 95 in 2014, but any uptick in interest in sailing is welcome. Nine of the sailing yacht orders are multihulls.

Our research this year revealed that the number of active shipyards producing 24-metre-plus projects is rising (up 12.6 per cent to a total of 170 shipyards). A growth in the number of active shipyards has not been seen since 2013-14, when there was a short respite to the post-GFC consolidation. While 170 is still significantly down on the 199 active yards recorded in 2008, the increase does show there remains considerable optimism – and appetite for risk – in the industry. Four of the newly active shipyards have order books consisting entirely of projects started on speculation; 16 of them have only one project under way. Nearly half of the newly active yards are entirely new to superyacht construction, with the others being yards returning to 24-metre-plus construction after some time out of the market.

Of the 19 newly active yards, 74 per cent are working on sold projects. One of these yards worth noting is Silent-Yachts, a builder of eco-angled catamarans, which reports five 24-metre-plus superyachts sold, with its first two scheduled for launch in 2020. Four of the new yards were founded to build sailing yachts.

Azimut-Benetti as a group continues to be the world’s most active superyacht builder, with more than 3.5 kilometres of superyachts under construction or ordered with deposits taken. It also has the most hulls in its order book with 101. Sanlorenzo documents 87 projects, up 13 per cent over last year, making it the most prolific single-brand builder in the world. The total length of Sanlorenzos under way, boosted by its move into bigger superyachts, sits at 3,061 metres.

The Ferretti Group** (parent company of the brands Ferretti, Pershing, Custom Line, CRN, Riva, Itama, Mochi Craft and Wally) would traditionally sit among these top yards, but it reports that it is not permitted to share precise order book information owing to rules surrounding its decision, later reversed, to list on the Milan Stock Exchange last summer. Despite this, the company was able to report some impressive revenue numbers for 2019: €465 million (£397m) in sales for the first nine months of the year, an 18 per cent increase year-on-year. We estimate the number of hulls on the company’s order book to be 94, but without clear access to hull numbers we are unable to verify – as we do with other yards – the total length of its production. Therefore, the Ferretti Group has been removed from the top builders table this year.

Similarly, Princess has been removed as the yard did not share verifiable data. We estimate its order book to comprise 31 hulls over 24 metres. For each of these companies, our estimate of their total length of construction has been included in countries’ totals.

According to our records, Feadship has 16 projects in build or on order, totalling 1,216 metres of construction, for an average size of 76 metres. Ten years ago, the average size of the superyachts on Feadship’s order book was 63 metres, demonstrating the yard’s success in moving up in size capability. The large Dutch builders all reported good numbers this year, with Amels declaring 14 orders and Heesen 13. Interestingly, the average size of yachts in Heesen’s order book has also risen over 10 years – from 46 metres in 2010 to 56 metres in 2020.

In Germany, Lürssen notes some of its nine known projects are set for delivery as far out as 2023. It leads the pack in terms of projects of more than 100m LOA; seven of its projects are beyond 100 metres in length.

We welcome two newcomers to the builder leaderboard this year, both Turkish: Bilgin, with five projects (four of them exceeding 80 metres), and Turquoise, which has six boats under construction.

Turkey takes third place from the UK*** largely thanks to a slew of large orders.

In fifth place, Germany demonstrates higher activity (+22.8 per cent), mainly thanks to Lürssen, Nobiskrug, and Abeking & Rasmussen, a yard that has dramatically increased the size of yachts it can deliver of late. All these yards have 100-metre-plus projects.

Asian countries are well represented, too. Taiwanese production has decreased slightly (-5.4 per cent) but maintains high numbers. Horizon, for example, reports a 14.3 per cent increase in projects YOY. Chinese activity is booming (+35.3 per cent), mainly thanks to the strong order books of Heysea and Jinlong.

More sobering is the news out of the US. Despite bright spots like Westport, which has five projects, the country as a whole has seen its total order book shrink 23.3 per cent in a year. This can be explained by the completion of a number of large projects not replaced by new orders, but also a decrease in the orders of large custom sportfishing yachts.

We recorded fewer projects started on spec in this year’s Global Order Book, down eight per cent on last year. It’s important to note, however, that spec projects still account for 42.9 per cent of the total order book. Semi-custom, speculative production has proved a boon to a large number of builders, as it appeals to impatient buyers unwilling to wait years for a new yacht. However, speculative production also increases builder vulnerability to consumer whims and economic turmoil.

Some yards, however, seem increasingly unafraid to start very large boats without an owner. Bilgin has an 85-metre project under way that is currently for sale and Turquoise has started a 75 metre on spec. The success of yards such as Amels, Heesen and Westport, whose business is built on high quality speculative production, has clearly influenced other players in the market. Smaller yards will often start a project on spec, but then adopt a “go slow” build programme until a buyer is found. In today’s time-poor world, yards are placing big bets on owners who would prefer to customise an offered envelope and get on the water sooner.

Of the 170 active yards counted in this year’s Global Order Book, 33, or 20 per cent, have order books comprising entirely spec projects.

The superyacht industry appears to be in a holding pattern, awaiting 2020 with a little anxiety. The combination of Brexit, the softening of major economies such as Germany’s, trade wars and general uncertainty are not, typically, conducive to a buoyant market. Rumours of well-known shipyards for sale and the Ferretti Group’s decision to reverse its IPO, despite declared results that paint the picture of a healthy shipyard, exacerbate the sense of unease. And yet areas of the market are performing very well: there are 21 100-metre-plus superyachts under construction, a 10-year high; the mid-sized market remains resilient; and the order books of quality, established builders are strong. Importantly shipyards, especially in the production and semi-custom segments, continue to invest heavily in their product lines, with the result that we’re riding a wave of superyacht innovation at the smaller end. Meanwhile, the big yachts leaving sheds and under construction reveal an owner class not afraid to push shipyards and designers to the limits of what’s currently possible – particularly when it comes to glass, hull forms, propulsion and efficiency. Perhaps a pause for breath, then, is not the worst thing that can happen – the chastening lessons of 2008-09 live long in the collective memory of this industry.

*Sunseeker, despite not sharing data this year, remains in the table as in all previous years the company has opened its order book to us, and we were therefore able to accurately assess its activity. Lürssen and Feadship have not shared official order book data, but since they build far fewer hulls it is easier to discern their order books through IMO declarations, yard visits and contact with the industry. The decision to remove the Ferretti Group and Princess from this table was taken as we were unable to independently verify their total length of construction, despite being able to make an educated estimate based on launches, published results, financial declarations and investigations in other parts of the industry. For all these builders, we have kept our estimates for their total length of production in the totals for their respective countries.

***Sunseeker’s largest project is under construction at the Icon yard in the Netherlands and is reflected in that country’s count.