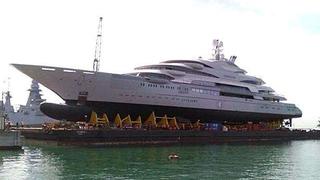 There were 42 superyacht sales in April according to our records, the highest April tally for at least five years – the closest was 28 in April last year. It’s exactly double the sales figure in April 2009 and the third highest tally of any month in the least five and a quarter years. The largest brokerage boat sold in April was Trinity’s 60m motor yacht Bacarella. Feadship’s 2005 motor yacht Issana (now Madsummer) follows in terms of size at 55m, as does 50m new build Big Star from McMullen & Wing. Fourteen of the yachts sold were from US yards, and six each from Taiwan and Italy.

Twenty-five superyachts came to the market in April, down on the previous month’s 29 and on 27 in March last year. The largest in April was the 64m sailing yacht Running on Waves launched by Polish yard Segel Masten in 2011, followed by another sailing yacht (there are four in all), the 49.8m Ariane, launched by Perini Navi in 2001.

According to our sources six new superyacht orders were made in April, down on March’s 10 but up compared with two in April last year. They include a 58.6m Perini Navi sailing yacht, due for delivery in 2016 and a 43m Codecasa motor yacht due in 2015. Four of the six new orders were for sailing yachts.

We know of 19 superyachts launched in April, compared with 13 in the previous month and 10 in April 2013. The largest by some way was Fincantieri’s 140m motor yacht Ocean Victory, which will become the ninth biggest superycaht in the world when she is delivered at the end of the year. Second in terms of size was 51.82m motor yacht Jade 95 from Taiwanese yard Jade Yachts, followed by 49.99m Christensen motor yacht D'Natalin IV. Ten of the yachts were over 30m long and eight were Italian-built.

Eleven superyacht deliveries were reported in April, up on six in both the previous month and April 2013. The largest was the 82m Blohm+Voss motor yacht Graceful, followed by the 49.90m Overmarine motor yacht Moonraker.

Subscribe to BOAT Pro to access brokerage sales data and unlimited specs for 12,169 yachts in our Superyacht Directory – the world’s most comprehensive superyacht data.