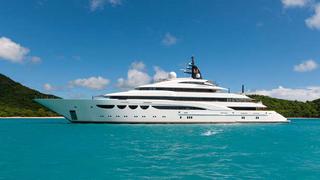 If superyacht sales are blooming, superyacht orders are booming, with a monthly tally three times the size of last February's. Together with a continuing reduction in the number of superyachts newly for sale, the figures paint a picture of a market returning to health.

Twenty-six superyacht sales were reported in February, up nine from January’s figure and on a par with 25 in February 2013. February figures have steadily improved since 2009, when the tally was three. The largest sale was that of 88m, 2013 Lürssen motor yacht Quattroelle. This was followed by Dutch yard ICON Yachts’ first build, the 62m, 2010 motor yacht Icon, which was asking €45,000,000. The 59.70m motor yacht Ulysses, built by US yard Trinity Yachts in 2006 was third in size – five of this month’s sales tally were American-built yachts.

An extremely encouraging 18 new superyacht orders were reported to us in February. It is a significant increase on January’s tally of seven and three times the figure reported in February 2013. The largest order was for a 68m motor yacht from Sunrise Yachts in Turkey, due for delivery in 2017, followed by a 54m motor yacht ordered from Baglietto in Italy and due in 2015. Nine of the orders were from Italian yards, only one sailing superyacht was ordered – a 38m Perini Navi due in 2015 – and the average size of the orders was good: only four yachts were less than 30m and 10 yachts were 40m or more LOA.

Thirteen superyachts hit the water in February. Nearly double January’s tally of seven, it also beats last February’s total of 11. The largest yacht launched was a sailer, 52.55m Doña Francisca, built by Buquebus in Uruguay. She was followed in size by 51m Heesen motor yacht Paloma and a 49.9m Mangusta 165 E motor yacht, built by Overmarine. Another two sailing yachts made the tally, including the 47.65m Royal Huisman Wisp.

We were told of six superyacht deliveries in February, down on January’s 10 but close to February 2013’s six. The largest yacht to be handed over to its owner was 56.4m sailing yacht Mondango 3, built by Alloy Yachts in New Zealand. Dyna Craft in Taiwan also delivered its 32m motor yacht D105, while San Sanlorenzo handed over its 31.7m SL104 motor yachts.