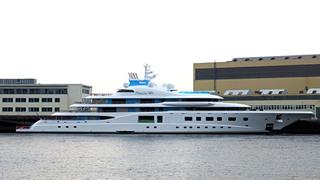 Figures remain stable in the height of summer. There have been slight decreases in sales but yachts of significant size are changing hands and hitting the water, while large sailing yachts make a surprise appearance in new orders.

We know of 33 superyacht sales in July, down from 45 in June but up on 28 in July last year. The largest yacht sold was the 88.8m Pride motor yacht project Illusion, due for delivery in 2015. This is followed by Sokar, a 63.7m, 1990 Codecasa motor yacht and the 59m motor yacht Capella C, built at Scheepswerft Pot in 1968. Twelve of the overall tally were Italian-built.

We know of 38 superyachts new to the market in July, up on 33 in June and 37 in July last year. The largest yacht new to the market was the 127m Privilege One project, under build at the Privilege yard in Italy and due for delivery in 2015. This is followed by 57.8m Abeking & Rasmussen motor yacht Lady Sheridan and 57m Trinity motor yacht Lady Linda.

We have been told of eight new orders in July, compared with 10 in June and 11 in July 2013. The largest is, unusually, a sailing yacht – a 58m Royal Huisman due for delivery in 2017. There were another two significant sailers in the tally, a 51m Holland Jachtbouw and a 35.2m Nautor’s Swan. Five of the eight boats were from Northern European yards and only one was less than 35 metres long.

There were 13 superyacht launches in July, a significant decrease from 21 in June, but on a par with last July, which accrued exactly the same figure. The largest yacht launched was major news, the 104m Lürssen motor yacht Quantum Blue. Nearly as significant was the same yard’s other July launch, 95.2m motor yacht Kismet II. Keeping up with the German’s, the Dutch yard Oceanco’s 88.5m motor yacht known as Y710 also hit the water in July.

According to our sources, there were 18 superyacht deliveries in July, compared to June’s 20 and July 2013’s 21. The largest was the 65.5m Amels motor yacht Z, followed by 52.4m Palmer Johnson motor yacht Bliss. Devonport’s motor yacht was not far behind at 50m. Ten of the tally were Italian-built, the largest being 49.9m Overmarine motor yacht Pumpkin.