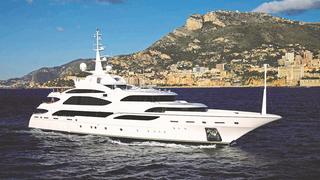 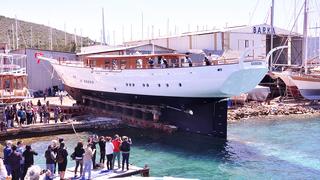 As summer blooms, superyacht sales stay strong and steady, while a slightly expanded crop comes to the market and new orders pick up the pace.

We know of 43 superyacht sales in June, exactly the same count as the previous month and slightly down on the previous June’s 49. Six months into 2015, we can see that while the year’s monthly sales tallies started strongly, they did not rise in line with 2014’s spring-summer trend of ever-strengthening numbers. To keep things in perspective, however, this June’s figure still trounces any June tally from 2009 to 2012 and when it comes to combined length, it has nearly 100m on May 2015, despite the identical number of sales. June’s largest sales were two 60m motor yachts: the 2010 Benetti Bistango and the 2009 CMN Cloud 9. Second place, in terms of size, was also a tie, with the Amels 180 project due in 2017 and 2013 Benetti Ocean Paradise, both 55m motor yachts.

Superyachts new to the brokerage market

Thirty-five superyachts were new to the brokerage market in June, up on 23 the previous month and on a par with 33 the previous June. Project Atom was the largest – by some way – at 135m. The Fincantieri project would take 52 months from signature of contract. The 72m motor yacht Stella Maris is next in size, launched by VSY in 2012, followed by 57.3 Zenobia, launched by Abeking & Rasmussen in 2003.

We know of seven new superyacht orders in June, compared with five in May and 10 in June 2014. The largest was a sailing yacht, a 60m Perini Navi due for delivery in 2017, followed by a 55m Amels motor yacht due the same year. Two of the tally were sailing yachts from Southern Wind in South Africa, at 31.78m and 24.72m.

There were 18 superyacht launches in June, according to our sources, compared to 20 in May and 21 in June 2014. The largest was Damen’s 69.15m support vessel Sea Axe 6911, followed by the 49.90m Codecasa motor yacht Gazzella and 49.60m Heesen Ann G. The largest sailer was 45.90m Zanziba by Archipelago Yachts in Turkey.

There were 12 superyacht deliveries in June, according to our records, compared with nine in May and 20 in June 2014. The largest was 81.8m Abeking & Rasmussen motor yacht Romea, followed some way further down the scale by 47m Gulf Craft motor yacht Majesty 155.