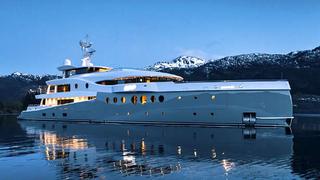 In contrast to August – when large yachts were sold but new orders were unimpressive – September’s figures show uninspiring sales but serious size in both new orders and yachts coming to the market.

We know of 18 superyacht sales on the brokerage market in September, down on 32 the previous month. The sizes were not at the top end, with 47.85m Picchiotti motor yacht Piano Bar the largest (compared with an 88.8m last month) and 31.4m Azimut motor yacht Escapade, launched in 2012, the youngest.

Thirty-eight superyachts came to the market in September, up on 31 the previous month but down on 46 in September 2013. There were some significant yachts among the month’s crop. The largest yacht to hit the market was 78m, 2008 Lurssen motor yacht TV, followed by the 74m Mondo Marine project Mondo Explorer, due in 2016. The 62m VSY Sealyon, launched in 2009 also came to the market, as did the well-known 2013 Amels motor yacht Event.

There were nine new superyacht orders in September, according to our sources, up on just three in August but fewer than last September’s bumper crop of 15. The three largest orders are notable: a 112m Lurssen motor yacht, due in 2018, and two Benetti motor yachts: a 107m and a 98.5m, due for delivery in 2019 and 2018 respectively.

We know of six superyacht launches in September, down on 10 in August but exactly the same figure as September last year, suggesting a seasonal trend. The largest September launch was 49.9m Alfulk, a motor yacht from Bilgin in Turkey, followed by 42.4m motor yacht Alive from Heesen in the Netherlands

According to reports there have been 28 deliveries in September, significantly up on 17 the previous month and 12 in September 2013. The largest was, unusually, a sailing yacht – 60m Perini Navi Perseus 3. This was followed by 58m Bennetti motor yacht Illusion I and 54.55m ISA motor yacht Forever One. The five largest deliveries were Italian built and a further 11 yachts from the country are included in the tally.

Subscribe to BOAT Pro to access brokerage sales data and unlimited specs for 12,159 yachts in our Superyacht Directory – the world’s most comprehensive superyacht data.