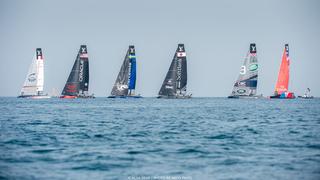 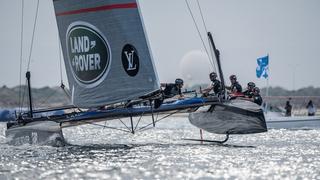 Boat International was invited to join Land Rover BAR in Oman for the America’s Cup World Series. The first day, in which the teams went head-to-head in two practice races, saw incredibly light winds meaning there wasn’t much foiling to be seen.

If there’s anything we can tell from the practice race, it’s that the ACWS in Oman will be a challenging and unpredictable one. The light winds meant the teams jumped around the leader board, many swapping places multiple times in each race.

Most of the teams enter the ACWS Oman with a relatively small difference in points. Considering the winner of each race on Saturday earns 10 points, and the winner of each race on Sunday earns 20 points, this could be a race that changes up the leader board once again – only 22 points separate the first place Emirates Team New Zealand from the fifth place SoftBank Team Japan.

With such unpredictable winds, the first race day tomorrow is very important, as Land Rover BAR crew Matt Cornwell explained: “It’s weighted so there are more points to play for on Sunday – but when it’s this tricky, there really could not be any racing on Sunday so they need to have a good day tomorrow”.

“It’s hard out there; it’s not easy to sail in these conditions, but that’s the way it is,” he added. “The points spread is going to be pretty big out out here. I think the points are going to be shared between everyone, it’s not like someone’s going to win race after race, I don’t think.”

Artemis Racing won both the practice races today, putting them in a confident position ahead of the first race day tomorrow.

After the fleet racing each team competed in a couple of match races. The teams don’t often get to match race but, as this will form a key part of the 35th America’s Cup in Bermuda, it was both enjoyable for the spectators to see something different and great practice for the teams themselves. The last race of the day was Land Rover BAR vs Oracle Team USA, with the British team making it past the finish line first.