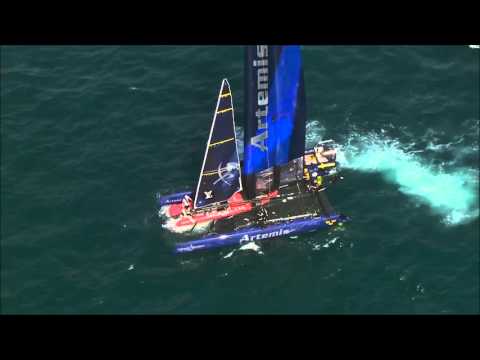 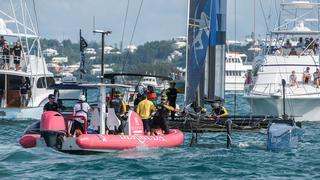 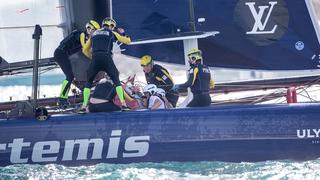 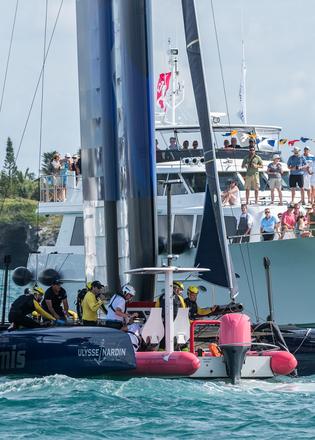 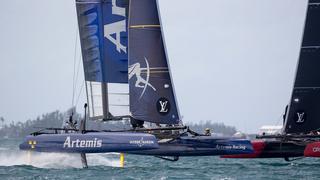 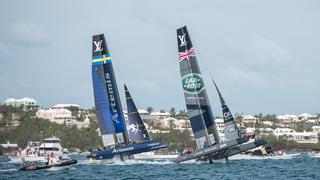 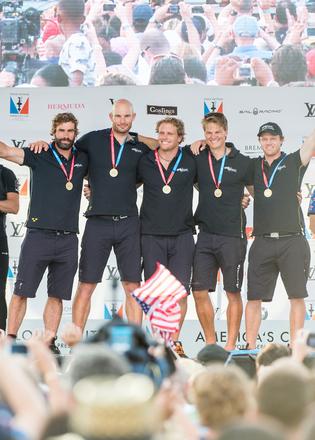 A severe collision nearly saw the Swedish team Artemis Racing knocked out of racing in the Louis Vuitton America’s Cup World Series Bermuda, but instead the last place competitor went on to win the entire event.

Going into the America’s Cup World Series in Bermuda in last place on the scoreboard, Artemis Racing pulled out an impressive performance to claim the win of the last Cup event of the season. The victory wasn’t without its bumps, quite literally, as the Swedish team was involved in a serious accident with an Umpire boat just before the second race, seen in the video and photos of the crash below.

As the Swedish team describes it, just minutes before the gun fired, they ducked behind the Japanese team’s boat, and as they turned toward the starting line the Umpire boat was heading directly towards them, the AC boat closing in at a speed of 25 knots.

“At that point we couldn’t go anywhere,” Artemis’s Helmsman Nathan Outteridge says. “He went straight between our bows, but thankfully nobody was hurt. There was a serious amount of damage to our boat though.”

Like an F1 pit crew, the Artemis crew quickly stripped its yacht’s broken bowsprit and a Code Zero sail, and with two minutes to spare, lined up for the start of the race. Amazingly, the Swedish team managed to win the second race despite the damage.

Outteridge says, “We owned that start. It was huge payback for all the hard work from the guys who stripped the gear off, checked the boat, and got us ready just in time.”

Saturday’s racing had been canned due to lack of wind, so Sunday was made more significant with each of the three races being worth double the points. A different winner claimed each race, but Sweden showed the most consistent performance to win the Bermuda event.

Oracle Team USA won the first race, but took third overall in the Bermuda World Series. Emirates Team New Zealand put on a good show in race three, coming in second for the event overall, while UK’s Land Rover BAR came in fourth in Bermuda, just shy of a place on the podium. Japan took fifth place, followed by France in last place.

“We had three races and three winners today. We’ve had three events now with three different winners,” said Russell Coutts the CEO of the America’s Cup Event Authority. “The racing is competitive and that makes it compelling. I wouldn’t even be surprised if we had another winner in our next event. That’s how close it is.”

The Swedish team went into the World Series in Bermuda with perhaps more to prove than any of the teams, facing a last place standing after the World Series on its home turf in Gothenburg, which New Zealand won.

"I'm very proud of the team. We had a lot of pressure to perform,” said team manager and tactician Iain Percy. “I know perfectly well that we have a talented enough team to win these events, but things haven’t gone our way, we’ve hit the odd rock and capsized, and suddenly everyone was questioning us. To deliver under that heat, and under the circumstances of the crash, was pretty impressive".

More than 10,000 people were out on the water to watch the America’s Cup World Series in Bermuda, with huge crowds watching from the shore as well. Grabbing more viewers' attention – both live and on TV – with the exciting racing format is just one of the ways the America's Cup is going mainstream.

Wrapping up the last World Series event of the year, the overall standings see New Zealand in first place with 122 points, Cup Defenders Oracle Team USA in second with 112 and Land Rover BAR in third with 109 points. Winning in Bermuda has helped Artemis pull itself up from last place to fourth, with 105 points.

The World Series schedule is yet to be announced for 2016, but we know that one event will be raced in the US with the first freshwater race in the Cup's history taking place in the “Windy City” of Chicago.