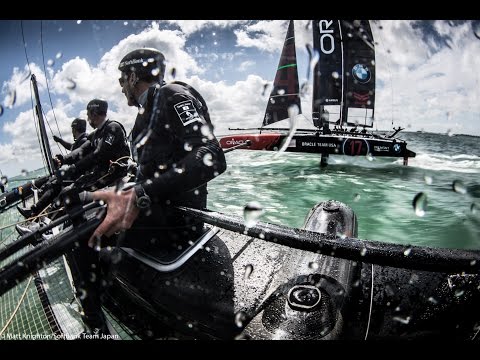 The America’s Cup World Series Chicago gets underway at Navy Pier tomorrow (June 10) and the Windy City appears to have taken the international racing series to heart.

As the video below shows, the America’s Cup trophy has already been paraded through the city centre, which will provide a spectacular backdrop for the weekend’s racing.

As well as being the first freshwater venue in the history of the America’s Cup World Series, Chicago boasts the largest public harbour system in the USA, with more than 5,000 berths giving plenty of boaters the chance to moor up and watch the action at close quarters.

To compliment this, the organisers have set up extensive on-water viewing areas to attract even more spectators. Navy Pier will host VIP hospitality areas, onshore entertainment and ticketed viewing areas to watch the racing as the AC45 yachts fly past.

While it’s notable that this is the first freshwater official America’s Cup race ever, the Cup already has ties the Windy City. The famous America’s Cup yachtStars & Stripes, once used as a training boat by Oracle Team USA, can be found in Chicago where fans can catch a ride.

Upon selection in September 2015, Cup organisers paid tribute to Don Wilson, a Chicagoan and passionate sailor who founded the Chicago Match Race Center (CMRC) in 2009 in order to bring world-class match racing to Lake Michigan. CMRC is the host manager for the event and Don Wilson is serving as a chairman to the Louis Vuitton America’s Cup World Series Chicago.