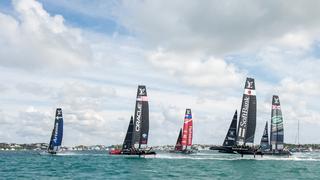 How to watch the America’s Cup 2017 from your superyacht

The superyacht program for next year’s America’s Cup has been revealed and promises owners a “premium place in the oldest competition for the oldest trophy in international sport”.

BWA’s Stefano Tositti said the program will offer “unprecedented on and off the water access”.

Organisers are confident that the new exciting race format featuring “the fastest boats in the world with the best athletes” will create an unforgettable spectacle.

“This next America’s Cup in Bermuda is on track to be an historic event," said Sam Hollis, chief operating officer of the America’s Cup Event Authority. “The racing on the water will be the most competitive we’ve seen, with six strong teams showcasing the best sailors on the fastest boats. The setting and facilities in Bermuda are truly stunning and our superyacht owners will enjoy a very special experience.”

Bermuda is hoping to use the America’s Cup to reinvent itself as a “new, adventuresome” destination with a nautical angle. The Bermudan government has passed a bill making it easier for superyachts to visit over a three-month period around the America’s Cup. It will also be possible for superyachts to charter in Bermudan waters during this period.